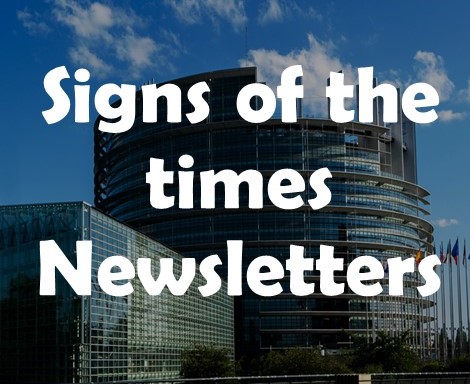 Signs of the Times – part 1

To whom there should be concern:

Quote of the times:

“The essence of all slavery consists in taking the product of another’s labour by force. It is immaterial whether this force be founded upon ownership of the slave or ownership of the money that he must get to live.”  Leo Tolstoy.

Reluctantly, but at the same time compelled, I feel I have to share with you what is about to come upon the world – to the surprise of most and the despair of many.
But before we get into the future we must deal with the present. Those of you how have an interest in the Bible will be aware that the Book of Revelation speaks about an end time power called Babylon – (to which God appeals to His people to come out of). Many of you will know that this power called Babylon is both a religious and a political power. But recent events should also have made biblically orientated people aware, that Babylon is also an economic power. The Biblical description of Babylon clearly points to its economic power (and its economic downfall). We find this description in Revelation chapter 18. Please pay particular attention to the end of verse 13, where it is stated that Babylon trades in “slaves and souls of men.” The Bible is constructed in such a way that large amounts of information are packed into terse pithy statements. It requires a bit of effort to think about what this terse pithy statement means. Gold miners do not end up with gold without a lot of effort. The Bible contains gold (information that we need if we are going to survive what is coming upon us). So what does “slaves and souls of men” mean? The “souls of men” reference is relatively easy – elsewhere we are told that Babylon makes the inhabitants of the world “drunk with the wine of her fornication.” This is not literally drunk but spiritually drunk – so that we cannot think straight – in other words Babylon owns our minds (this is the religious and political control). So what does it mean to be a slave of Babylon?

History helps us to understand this question: what it means to be a slave of Babylon? Under the old feudal system people were not free. The land was owned by the Lord of the Manor and the people, who lived on the land, were his indentured servants or serfs. The feudal system was rigidly organized. If the people were going to live on the land they had to give half of their labour to the Lord of the Manor and the other half they were allowed to work for themselves. In addition, there were all sorts of restrictions, for example the serfs could not leave the land without the Lord’s permission. This system prevailed in Europe for hundreds of years (those years are now called the Dark Ages). However, the darkness prevails. Today we live under a different economic system but the result is the same. In order to pay all our taxes and our mortgages/rent, it takes at least half our working time. The other half of our working hours is for us. However, this is just a small part of the economic control that Babylon has over us. The primary control method is through control over the issuing of money and credit. In the Babylonian system money and credit, can only be issued into circulation if somebody borrows it. If the economy is going to grow, then more money needs to be put into circulation. Money is like blood in the body – not enough blood in the body – you get a sick body. Not enough money in the economy – you get a sick economy.

However, if Babylon requires that money and credit can only be issued by borrowing (with interest payments attached, of course) – this means that the level of debt will inevitably rise exponentially, to levels that are unsustainable. My friends, we have reached that time. This is why the world is in economic chaos – and it will only get worse. Humpty dumpty has fallen off the wall – and all the kings horses and all the kings men cannot put Humpty Dumpty back on the wall again – although they are trying – but soon they will run out of band aids and confidence in the system will collapse. So what to do next? Well there is one more band aid – the band aid of last resort – and that band aid is WAR. Have you heard the war drums recently – or have you noticed the sabre rattling – Afghanistan, Iraq, Libya – Syria will be next. Historically, war has always been the solution to insoluble economic problems – and this time it will be no different – only this time it will be much larger and much more destructive – it will be WWIII.